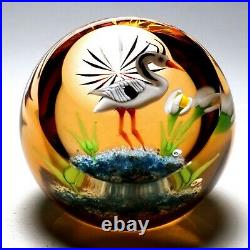 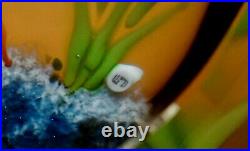 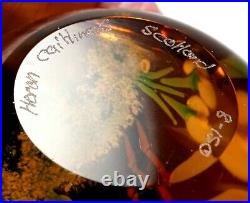 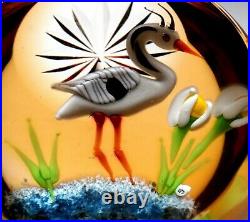 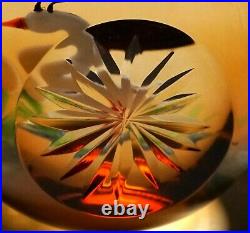 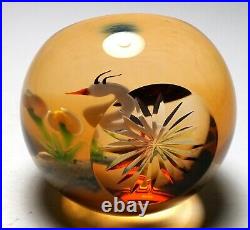 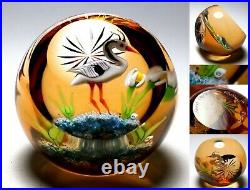 William Manson Caithness Heron 1997 Limited Edition Paperweight. This upright paperweight features an elegant tall white and black heron wading in shallow water near white flowers and green vegetation. The ground is a translucent amber. The paperweight is faceted with a large front facet and a star cut back facet.

The amber ground and the star pattern create the effect of the sun rising (or setting) in the background. There is a William Manson, Sr.

"WM" signature cane at the base of the flowers. In addition, this paperweight is signed on the base / bottom "Heron Caithness Scotland 8-150", indicating it is number 8 in a limited edition of 150 paperweights. Please ignore the white areas, they are glare from the light.

This design is listed and designated CT-1426 on page 205 of the Charlton Standard Catalog of Caithness Paperweights. It is part of the Traditional Collection Series. Heron was designed in 1997 by William Manson, Snr. And issued in a limited edition of 150 paperweights.

Of these, only 112 were made. This example is marked 8-150. Caithness Glass was founded by Robin Sinclair in Wick in north eastern Scotland in 1961. The factory did not start making paperweights until 1962 when Paul Ysart joined Caithness. Colin Terris joined Caithness in 1968 and started the modern line of paperweights in 1969.

A second factory was opened in Oban in 1969 and the Perth factory opened in 1979. More recently Caithness recently went through a number of changes of ownership. Finally, it was bought out of receivership by Dartington Crystal. The factories in Wick, Oban and Perth all closed and were replaced by a smaller operation and visitors' center in Crieff. Started his glass working career at Caithness Glass at the age of 15 in the 1960s. He apprenticed with Paul Ysart. Manson left Caithness in 1971 to work at Ysart's Harland Glass and rejoined Caithness several years later in 1974. He was at Caithness on and off between 1974 and 1997. During this period he also had a small studio at home. In 1997 he left for good to form his own studio William Manson Paperweights. After Perthshire closed in January 2002, William Manson Sr. Started Phoenix Paperweights to engage three workers from Perthshire. They only lasted a year and issued paperweights in 2002 and 2003 before closing in August 2003. Phoenix operated in the Manson works in Perth, Scotland. Made collaborative paperweights with John Deacons. Size: 2 1/2" diameter by 2 3/8" high. This upright paperweight has a large front facet and a star cut back facet. The base / bottom is ground flat. No cracks, chips, or scratches found on inspection. Signature: It is signed with an engraved script signature on the base / bottom "Heron Caithness Scotland 8-150".

Allan's Paperweights is owned by Allan Port. If in doubt, please check with me first. Please do not ask me to declare this a gift. The item "William Manson Caithness Heron 1997 Limited Edition Paperweight" is in sale since Sunday, May 30, 2021.

This item is in the category "Pottery & Glass\Glass\Art Glass\Paperweights". The seller is "paperweights" and is located in Wellesley, Massachusetts. This item can be shipped to United States, Canada, United Kingdom, Germany, Japan, France, Australia.