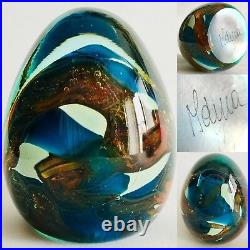 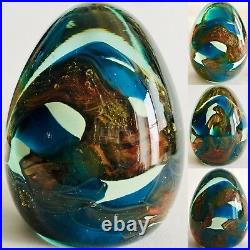 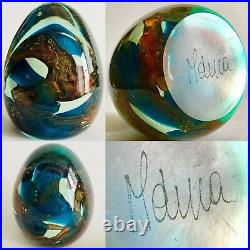 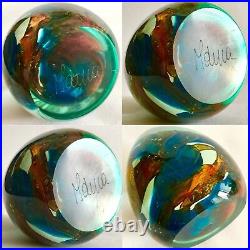 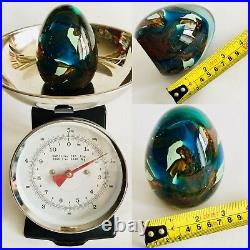 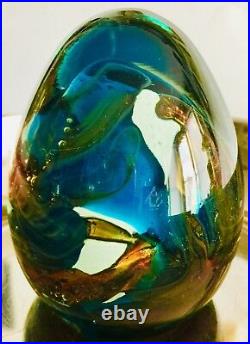 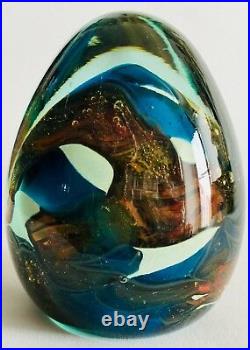 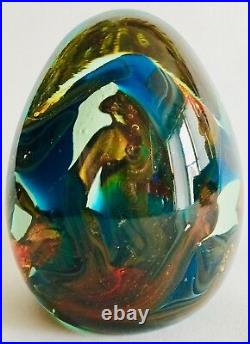 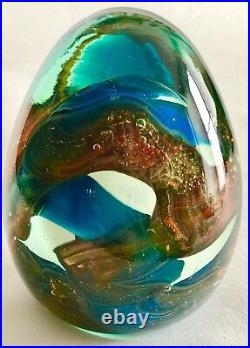 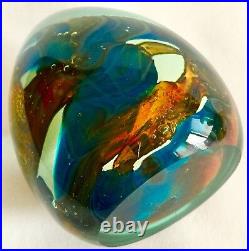 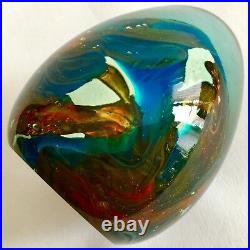 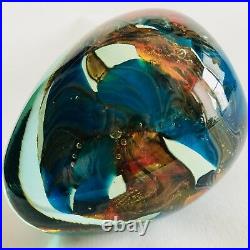 Rare Collectors Signed Heavy (850g) Mdina Glass Abstract Design 4/10cm Paperweight. In perfect condition as shown in 12 sets of photographs attached. Please browse all photographs for size, weight and condition as they are self explanatory. The company, Mdina Glass, became an active glassmaking company in 1968. This was the first of a series of achievements for Mdina Glass.

Just two years down the line Mdina Glass would already be participating in international trade fairs and exporting to Italy and America. In 1971, two Italian maestros were brought over by Mdina Glass to introduce Italian glassmaking techniques to Malta.

Exports of Mdina Glass products to the UK commence, and soon this becomes the companys main overseas market in terms of direct and indirect exports. A year later, Mdina Glass welcomes HRH Princess Anne as part of a state visit to Malta. After just a couple of years, Michael Harris left Mdina Glass, leaving Eric Dobson to run the company. In 1975, Joseph Said , originally Michael Harriss most gifted apprentice, became the companys Production Manager and acted as a catalyst for a number of changes, revolutionising the way the company operated and what it produced. Mdina Glass increased the number of skilled glassmakers and expanded output to meet the considerable increase in the demand for their products and enhanced quality control measures.

This period also saw the beginning of the use of crystal cutting techniques. By 1976 exports to Germany were underway, while in 1983, Mdina Glass furthered its overseas sales drive to Japan.

In 1985 Eric Dobson chose to return to the UK and relinquish control of the company. Joseph Said stepped into his shoes, becoming the owner of Mdina Glass.

Under new ownership, Mdina Glass invested heavily in new equipment and in researching new techniques. In 1987 Mdina Glass won the International Award for Tradition and Prestige in Brussels.

The same year also saw the companys first exports to France. Two years later, Mdina Glass presented a glass sculpture to the Maltese Prime Minister to commemorate the Bush Gorbechev Malta summit. In 1992, the company won the Malta Achievement in Industry Award. Further significant changes in glassmaking techniques, production processes and product range marked the 1990s. Basic raw materials were changed for those of a much higher quality.

In 1990, Mdina Glass introduced lampworking techniques to Malta, and by 1995 its artisans were also honing their skills in applying the newly introduced fusion techniques to a whole new range of products. The early 90's also saw the company starting to export to various countries, a trend that continued throughout the 90's and up to the present day. In 1996 the former President of the United States of America, Jimmy Carter and Mrs Carter, visited Mdina Glass. The latter half of the 90s marked the start of the active involvement of a new generation of the Said family in Mdina Glass. Nevise, Joseph Saids eldest daughter, joined the company in 1996, overseeing local sales and exports.

Three years later, Pamela joined the company to manage the retail section. Olivia subsequently joined the company in 2000, taking over responsibility for production and product development. In 2008, Joseph Saids son Alan also embarked on a career at Mdina Glass, starting off as a trainee in glassmaking and fusion.

During this period, the company started participating regularly in a number of international fairs, including MACEF in Milan and NEC in Birmingham. On the local front, the company made significant headway, particularly with the opening of new retail outlets in Merchants Street and the Cruise Liner Terminal in Valletta, as well as shops in Mdina, Bugibba, Sliema and Victoria in Gozo. Production expanded once again, requiring the reinforcement of the artistic team.

This also enabled Mdina Glass to produce designer pieces and limited editions. New Italian glassmaking techniques, such as incalmo, filigrana and murrine were introduced for the first time in Malta. Mdina Glass also started working with a number of professional interior designers. In 2002, Mdina Glass was engaged to work on prestigious contracts such as those of the Corinthia Towers in Tripoli, the Intercontinental Hotel in Malta, and The Malta Hilton. In 2003, the company took its first steps into cyberspace with its own website.

The site is now in its third-generation version with the latest re-launch in 2014. Mdina Glass has also won the prestigious National Artisan Award from the Ministry for Fair Competition, Small Business and Consumers for two consecutive years, covering 2010 and 2011.

November 26th, 2015 saw the Duchess of Cornwall make an official visit to Mdina Glass in Ta' Qali as part of CHOGM 2015 (Commonwealth Heads of Government Meeting), which was being held in Malta. The Duchess met Mdina Glass staff and toured the production workshop and showroom.

As a memento of the occasion, the Duchess was presented with a Limited Edition glass bauble Christmas tree. Mdina Glass continues to strive ahead and move with the times, expanding its products and developing production techniques. The company has also made its glassware available to the worldwide market with its extensive online store. The item "Superb Rare Signed Heavy (850g) Mdina Glass Abstract Design 4/10cm Paperweight" is in sale since Sunday, September 16, 2018. This item is in the category "Pottery, Porcelain & Glass\Glass\Paperweights".

The seller is "santoor-uk" and is located in Ladywell (Near Eccles), Greater Manchester. This item can be shipped worldwide.