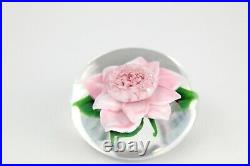 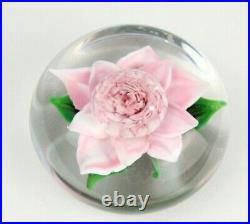 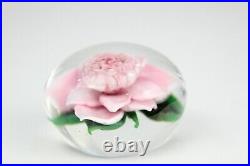 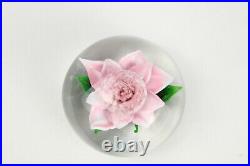 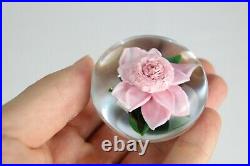 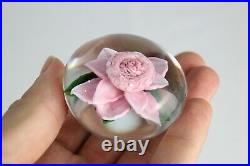 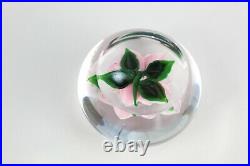 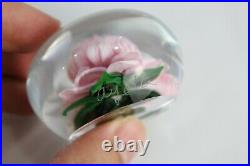 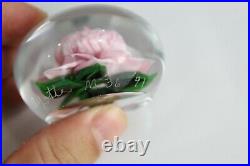 A well-executed Rick Ayotte paperweight featuring a pink flower. Signed along the base and dated 1991. Measures approximately 2.1 diameter.

About Rick Ayotte Born and raised in New Hampshire, Rick Ayotte was always drawn to nature exploring the woods and waterways, and studying the animals. In 1978, he began to marry his passion for nature with his skills as a glassblower as he created wildlife art with glass. After graduating high school in 1962, Ayotte began a ten-year career as a scientific glassblower, working for the Macalaster Scientific Corporation. He became masterful with glass and its malleable properties, and created small lampwork figurines to sell at giftshops. Paul Stankard, a colleague from Macalaster, who had already begun his auspicious career as a paperweight artist, encouraged Ayotte's talent.

There was something pleasing and intimate about the spherical shape of paperweights that really appealed to me, Ayotte said. It opened a lot of doors for me artistically. Being an admirer of the antique paperweight makers, Ayottes work was influenced by the French glasshouses of Baccarat, Saint Louis, and Clichy: the spherical presentation, the optical qualities of crystal, and the use of color to seduce the eye.

In the late 70s and early 80s, Ayotte began to create his world in glass. Among his first editions were his beloved eastern bluebirds and tropical keel-billed toucans.

Ayotte worked very intensively, and developed a technique where he used glass rods, like a brush, to create subtle color blends, allowing for smoother transitions, creating a series of paperweights entitled Glasscapes, where imagery appeared painted and encased in glass. This style propelled him to explore other non-traditional presentations, and he began to incorporate more scenery and flora into his compositions. These designs led Ayotte to create upright, three-dimensional paperweight presentations, as well as glass bouquets, which he began to exhibit in the 1990s. For over two decades, Ayotte has studied glass, lived in a glassworker's habitat, and mastered the fluid medium's character. He has created some of the most vivid paperweight designs, in motifs all his own.

The seller is "kylescrossroads" and is located in Glen Mills, Pennsylvania. This item can be shipped worldwide.