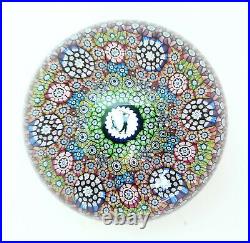 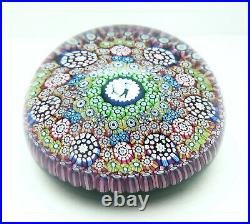 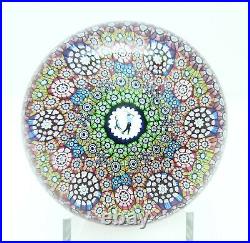 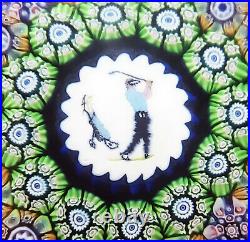 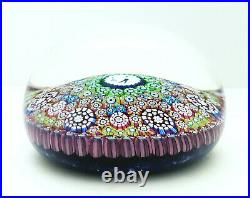 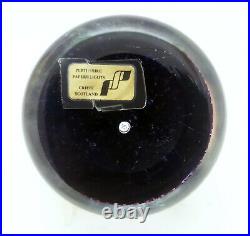 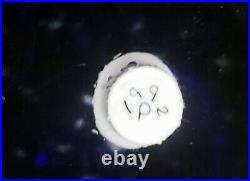 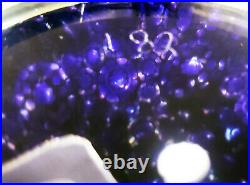 The PP81 is a large millefiori paperweight that was made as a limeted edition from 1985 - 1995, and again in 1997. Over this period of time four distinct patterns were used. All of these designs have a golfer in the center of the weight. From 1985 through 1991 the golfer was a glass transfer image surrounded by millefiori. Starting in 1992 the center golfer was changed to a colored picture cane of a golfer and his clubs. While the picture cane was used for all weights from 1992 forward, the rest of the design of this particular weight was only used for two years, in 1992 and 1993. It consists of a complex closepack concentric pattern of canes in multiple colors, accented by six very large complex canes alternated with six smaller complex canes near the perimeter. In my opinion, this design is by far the most attractive of the four designs used for the PP81. The base of this weight was fire polished and then ground concave in the center. The ground is a deep translucent purple. There is a'1992 P' cane in the center of the base. The base is also engraved with the edition number for that year, 182. Most limited edition weights numbered 300 or less in a given year, but I don't know exactly how many PP81s were made in 1992. In addition to the signature cane, there is an original Perthshire paper label affixed to the base. Not too many weights have these paper labels, as the glue fails over time and they fall off and get lost. In this case, someone has Scotch taped the label to the base to prevent this -- not a choice that I would have made as it is unlikely that you could remove the tape without damaging the label, but at least the label is still with the weight.

The weight is 3.3" in diameter and 2.1" tall, and is in perfect condition. Perthshire was founded in 1968 by Stuart Drysdale, then General Manager of Strathearn Glass. His intent was to produce high quality paperweights in the classic French Style.

Perthshire Paperweights did just that until the factory closed in 2002. The item "Perthshire PP81 (1992) Limited Edition'Golfer' Paperweight" is in sale since Saturday, August 15, 2020.

This item is in the category "Pottery & Glass\Glass\Art Glass\Paperweights". The seller is "daniaglass" and is located in Chicago, Illinois. This item can be shipped worldwide.