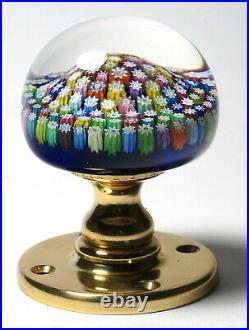 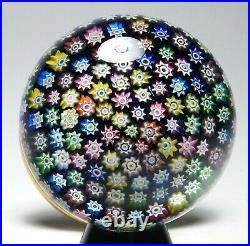 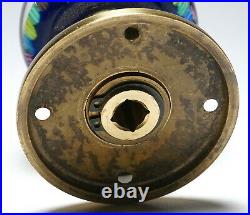 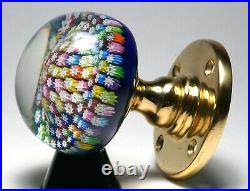 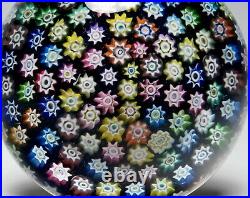 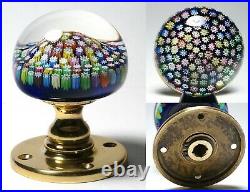 This example is signed with Perthshire's "P" signature cane near the center of the design. The brass door plate has four holes for mounting. Mounting screws are not included. Every collector should have at least one of these paperweight. Many collectors use them in their homes.

Perthshire made this PP18 doorknob from 1969 to 1978 and from 1984 to 1997. It was part of the general line. Only the earliest knobs were unsigned. After the first few years, they were signed with a "P" signature cane near the center of the design. Please Note: The stand shown in the pictures is not included with the paperweight.

It is shown for illustration only. Note on white glare : Please ignore the white areas, they are glare from the light. Interestingly, the PP18 is the only simple closepack that Perthshire made until 1997.

All of Perthshire's other closepack designs were limited edition or annual collection designs and had complex canes. In 1997, I asked Peter McDougall if he would make one for me as a paperweight rather than a doorknob. He did and they liked the result so much that they decided to put it into regular production in two sizes.

They also made a miniature closepack for in this design for the 2001 PCA Convention. Perthshire was a small company in Crieff, Scotland that was devoted to the creation of quality glass paperweights. They stopped production in January 2002 after more than 30 years of production.

Their paperweights were consistently high in quality and yet remained reasonable in price. The birth of Scottish paperweight making is credited to the glass making family of Salvador Ysart, who moved to Crieff, Scotland in 1922.

They worked first at John Moncrieff Ltd and made the earliest Scottish paperweights during that period. In 1946 Salvadore and his sons Augustine and Vincent founded Ysart Brothers Glass and produced glass wares under the Vasart label. Salvador Ysart died in 1955 The company name was later changed to Vasart Glass. Stuart Drysdale was hired manage the business side of the enterprise in 1960.

The company evolved into a new company Strathearn owned by Teachers Whiskey. In 1967 Drysdale was sent a magazine article on antique paperweights (Woman's Day, July 1965). The inspired him to try to produce weights comparable to the French antiques. With this goal in mind, he and several of the glass workers left Strathearn to found Perthshire in 1968.

Size : 2 1/4" diameter by just over 3" long (including the brass mounting). The brass plate is 2 3/8 diameter. Signature : Signed with Perthshire's "P" signature cane near the center of the design.

Condition : Excellent condition with no chips or cracks or scratches on the glass. There is some aging on the brass. Allan's Paperweights is owned by Allan Port.

If in doubt, please check with me first. Please do not ask me to declare this a gift. The item "Perthshire PP18 Closepack Millefiori Paperweight Doorknob" is in sale since Sunday, July 26, 2020. This item is in the category "Pottery & Glass\Glass\Art Glass\Paperweights". The seller is "paperweights" and is located in Wellesley, Massachusetts. This item can be shipped to United States.