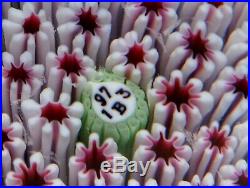 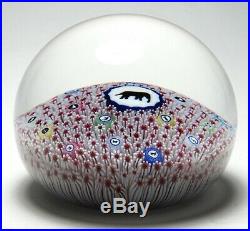 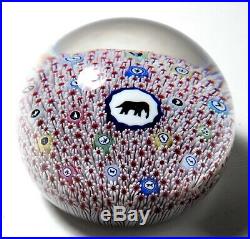 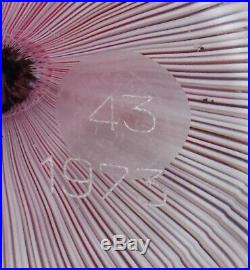 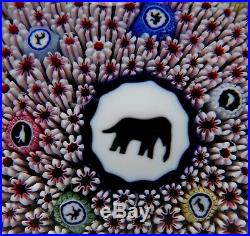 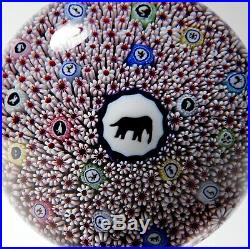 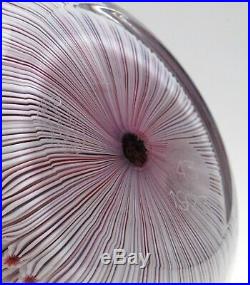 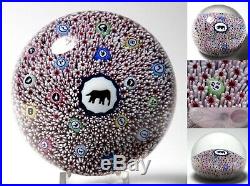 Baccarat 1973 Gridel Series Millefiori Elephant Limited Edition Paperweight. This modern millefiori paperweight features a large central black Gridel elephant silhouette on a white background with a dark blue surround. The elephant cane is set on a carpet ground of red and white canes and is surrounded by two rings of smaller Gridel millefiori. The inner ring is a circular garland of six Gridel canes. The outer ring is an undulating garland of eleven Gridel canes and a Baccarat's complex signature / date cane "B 1973".

In all, there are eighteen Gridel canes (the large elephant and seventeen smaller canes). This design was released in 1973 in a limited edition of 350 pieces.

This is number 43 in that edition. This paperweight is also signed on the base with two acid etched Baccarat marks along with the year (1973) and edition number (43). Please Note: The stand shown in the pictures is not included with the paperweight. It is shown for illustration only. Note on white glare : Please ignore the white areas, they are glare from the light. Hopefully this will be temporary. Note : I have many other paperweights from modern Gridel series available for sale. Also, please ignore the white areas, they are glare from the lights. In 1846 Baccarat introduced the popular Gridel figures in their closepack millefiori paperweights. It was named after Emil Gridel, the nephew of Jean-Baptiste Toussaint the general manager of Baccarat. Toussaint saw Gridel making paper cutouts of animals and saw an opportunity to incorporate these silhouettes in millefiori paperweights. From 1971 to 1979 Baccarat issued a modern Gridel series of millefiori paperweights based on eighteen Gridel figures. Each paperweight has a large Gridel figure in the center with smaller versions of the other figures included in the design.

There are variations in orientation and color as well as the types of canes in each design and it is possible to amass a very large collection covering just this series. Very Large Size: 3 3/16" diameter by just over 2 1/2" high. The base is ground flat. Signature: The paperweight is signed with Baccarat's complex signature cane "B 1973" in the design.

It also has two acid etched Baccarat marks on the base along with the year (1973) and edition number (43). There are some scratches on the base, but no other chips, cracks, or scratches found on inspection.

Baccarat was founded in 1776 in Alsace-Lorraine with the name of Verrerie de Sainte Anne. The original location was near the town of Baccarat. Today the firm is known as Compagnie des Cristalleries de Baccarat.

Most collectors refer to three periods of Baccarat paperweight production. This classification is definitely an over simplification. Baccarat continued to make paperweights after the classic period, but little is known about the extent of the product line or who made the paperweights. What is known is that by 1910, the offering in the catalog had dwindled to pansy paperweights, simple open concentric paperweights, and rock paperweights. Dupont, who supposedly was the last worker at Baccarat to know the secrets of paperweight making. No collector or scholar ever met Mr. Dupont although at least one visited the Baccarat factory and asked to meet with him.

The weights stopped appearing in the shop in 1934. In 1952, Paul Jokelson approached Baccarat with the idea of making sulphide paperweights again.

Please do not ask me to declare this a gift. The item "Baccarat 1973 Gridel Series Millefiori Elephant Limited Edition Paperweight" is in sale since Sunday, August 23, 2020.

This item is in the category "Pottery & Glass\Glass\Art Glass\Paperweights". The seller is "paperweights" and is located in Wellesley, Massachusetts.