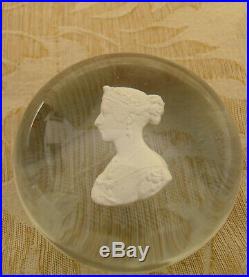 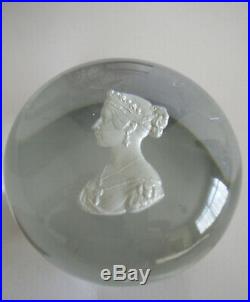 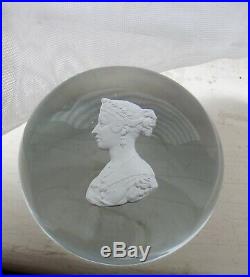 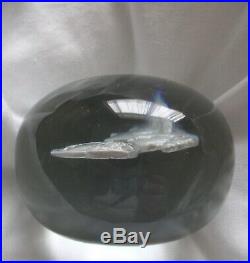 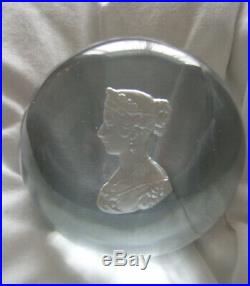 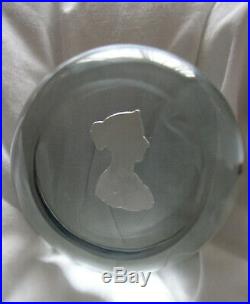 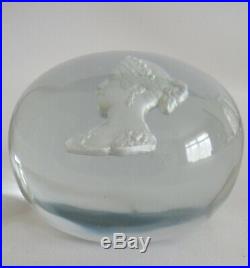 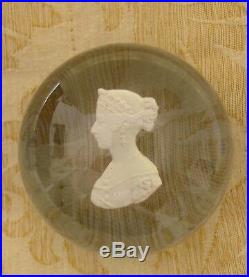 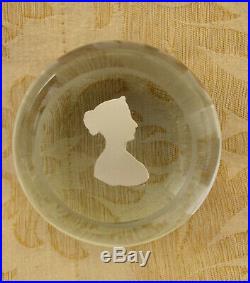 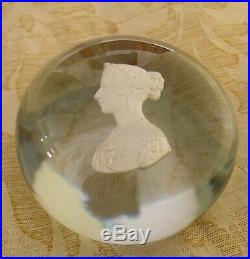 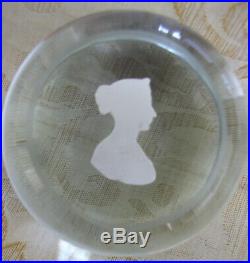 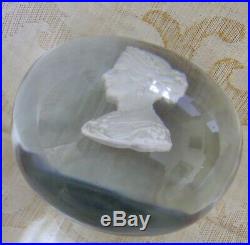 Just a reassurance re the dreaded virus.... We have been'confined to barracks' by reason of our ages for over 100 days, with no physical contact with anyone, including family.

No visitors, except at a very prudent distance! This situation will continue to be the case for as long as it takes! The things I have on sale have been here or in separate store for years and the packing materials used have been here for months and are therefore as free of the virus as we are... This beautiful rare sulphide paperweight, made by Clichy c 1851, is one of a small collection of incrusted sulphide weights that I shall be listing during this week. Some think that this is by Baccarat but one example is in the Bergstrom Mahler Museum identified firmly as Clichy.

The Jokeleson Collection had one, also attributed to Clichy However, on page 27 of Paul H Dunlop's book "The Jokelson Collection of Antique Cameo Incrustation" there is a illustration of a round blue paperweight containing the same incrustation of Queen Victoria and attributed to Baccarat n. B This is also one of a small group of three issued at the time which have Queen Victoria and her beloved husband, Prince Albert as their subject. This one features the Queen herself.

(The second one is Prince Albert alone whichshall be listing separately) and a third depicts the Royal couple together. This is a rare opportunity for collectors either to acquire two of these these as a set or to make good any gaps in these royal designs in an existing composite collection. Both are wonderful examples of the various items made in the 18th and 19th centuries which incorporated these superb cameo portraits of famous and historically important figures in the form of incrusted sulphides. In this case, the famous lady is Queen Victoria herself. The Clichy factory was known for its excellence and the beauty of its glass from its beginnings when Joseph Maas established it near Paris.

It moved to the Paris suburb Clichy-la Garenne and was known then as the Cristallerie de Clichy. It produced the most beautiful glass pieces, including paperweights until the 1860s. In 1885 it closed and was taken over by the Cristallerie de Sèvres.

This paperweight measures 5cms (2) across the base and is about 5cms (2) tall. The sulphide is clearly visible from both sides of the enclosing glass. It is possible that this and the other two were made for the Great Exhibition held in London and masterminded by Prince Albert in 1851.

It weighs 416 gms before packing. Famous artist craftsmen elsewhere, such as Apsley Pellatt, and Desprez had been experimenting in the production of these wonderfully silvery incrusted portrait cameos.

John Wood was very highly regarded later in the 19th Century. Condition This lovely example is made of pure crystal glass and it features an incorporated silvery white sulphide of the Queen exquisitely depicted in fine detail. This rare sulphide itself is of the highest quality, detailed in design and execution. There are no cracks, restoration or chips.

It is some 169 years old and it wears its years well! I always, as a matter of policy, use a signed for and tracked postal option and insure for the full value. I pack most carefully in good strong packaging for which I make no charge. I have also learned that with very small and/or fragile items, it is safer and more prudent to pack in a comparatively large box. Please feel free to ask any questions.

The item "ANTIQUE CLICHY INCRUSTED SULPHIDE PAPERWEIGHT OF QUEEN VICTORIA c 1851" is in sale since Saturday, July 4, 2020. This item is in the category "Pottery, Porcelain & Glass\Glass\Paperweights". The seller is "hollinshed" and is located in Hampshire.