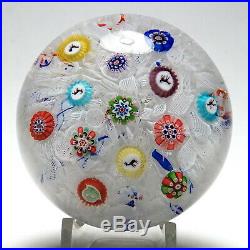 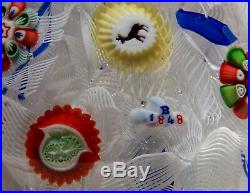 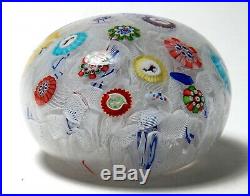 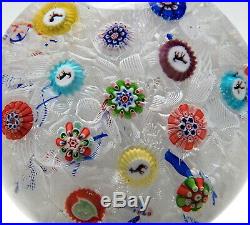 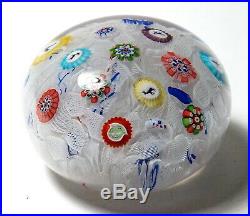 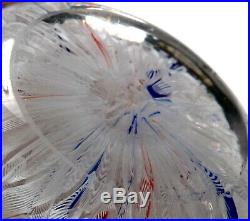 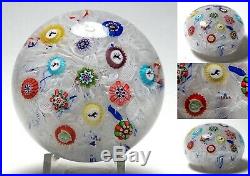 The six Gridel figures are the rooster, dog, lovebirds, hunter, goat and deer. The design is placed on a white lace ground with bits of colored filigree.

The paperweight is signed and dated with a "B1848" cane in the design. This is a truly wonderful paperweight to own. According to Paul Dunlop in the. The first Gridel cane to appear was the lovebirds cane, which appeared in some 1846 paperweights. The others appeared in 1847 or later.

It is shown for illustration only. Note on white glare : Please ignore the white areas, they are glare from the lights. Small Size : Just over 2 1/2" diameter by just over 1 3/4" high. The bottom is ground slightly concave..

Condition : Excellent condition for its age. There are a couple of tiny nicks on the edge of the base and one faint scratch on the dome, but no other scratches, chips, or cracks found on inspection. Signature : Signed and dated with a "B1848" cane in the design. Baccarat was founded in 1776 in Alsace-Lorraine with the name of Verrerie de Sainte Anne. The original location was near the town of Baccarat.

Today the firm is known as Compagnie des Cristalleries de Baccarat. Most collectors refer to three periods of Baccarat paperweight production. 1953 - on - Modern period. This classification is definitely an over simplification as it is likely that Baccarat made some paperweights on and off through most of 19th century. Pansy weights and rock weights continued in production until much later.

Some paperweights are identified as Dupont period and were made at the end of the 19th Century or early in the 20th century. It is known that by 1910, the offering in the catalog had dwindled to pansy paperweights, simple open concentric paperweights, and rock paperweights.

Dupont, who supposedly was the last worker at Baccarat to know the secrets of paperweight making. No collector or scholar ever met Mr. Dupont although at least one visited the Baccarat factory and asked to meet with him.

The weights stopped appearing in the shop in 1934. Very little is known about Mr. Boyé, but there is enough similarity in the millefiori canes to suggest that he had access to the original molds or some of the original millefiori canes from the classic period. He later trained another glassworker, Georges Brocard, to make open concentric paperweights in 1946. Armed with this knowledge, Brocard was influential in the revival of paperweight making at Baccarat in the 1950s. You can read more about the Baccarat paperweights in the new book. Baccarat Paperweights - two centuries of beauty. By Paul Dunlop or one of the older books on paperweights in general, such as. The Encyclopedia of Glass Paperweights. Allan's Paperweights is owned by Allan Port. If in doubt, please check with me first. The item "Antique Baccarat 1848 Small Spaced Millefiori Paperweight with Six Gridel Canes" is in sale since Sunday, January 5, 2020. This item is in the category "Pottery & Glass\Glass\Art Glass\Paperweights". The seller is "paperweights" and is located in Wellesley, Massachusetts. This item can be shipped to United States.